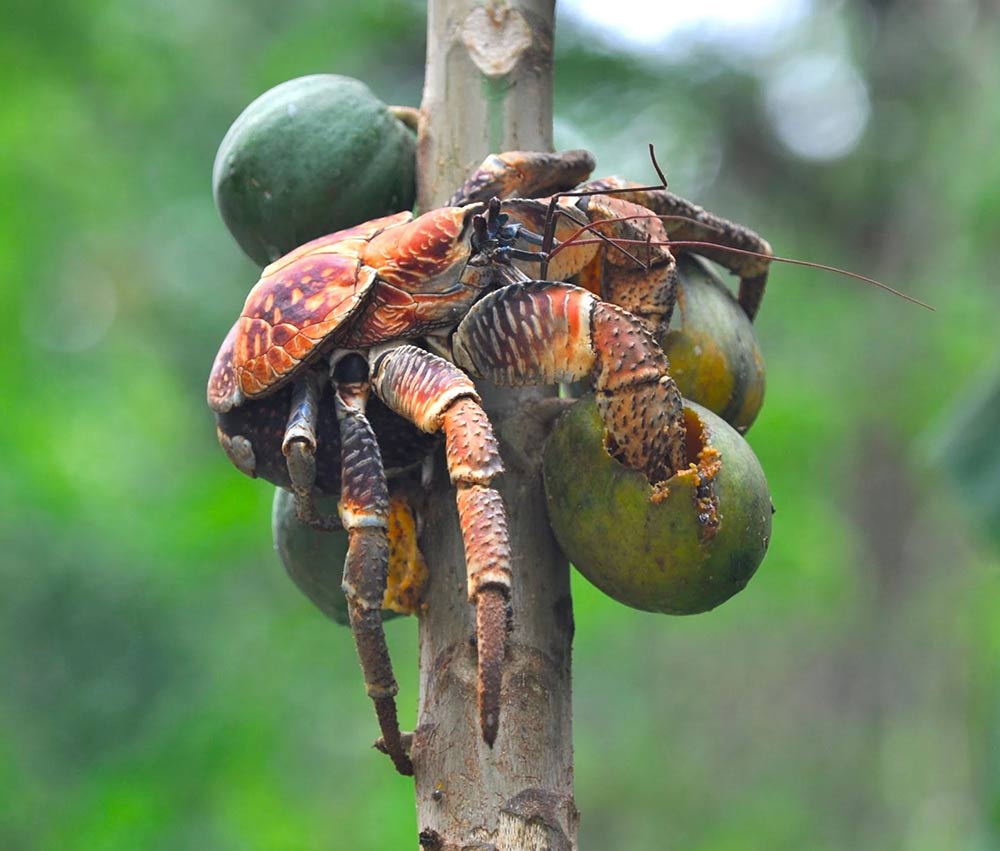 Christmas Island makes many a traveller’s bucket list due to the annual spectacular migration of our showy, shiny red crabs. As kids growing up and learning about the world from David Attenborough’s documentaries ( before google) many people attest that the segment they most often can recall is a small island completely overrun by red crabs – blocking roads, entering houses and filling gardens whilst on their annual migration to the sea. Little do people realise that Christmas actually has nearly 2 dozen land crabs, some very easily seen, others a little more elusive, but the single species that actually makes the greatest impression on our guests – the giant Robber crabs.

Known as coconut crabs at other locales around the Pacific and Indian oceans, their Latin name, Birgus latro, with latro meaning robber, thief, highwayman or brigand, is the perfect descriptive for these jungle thugs. Tasty or shiny seems to be their only prerequisites when it comes to identifying suitable bounty. Christmas Island has little to no crime so when things go missing from your yard, a tool carelessly left out, shoes missing from your back porch, most locals don’t instinctively accuse wayward youth and call the police to report their loss. They start a search, in the nearby vicinity, in hopes that if the thief has worked out their cache isn’t edible, they will leave it not far from the scene of the crime. 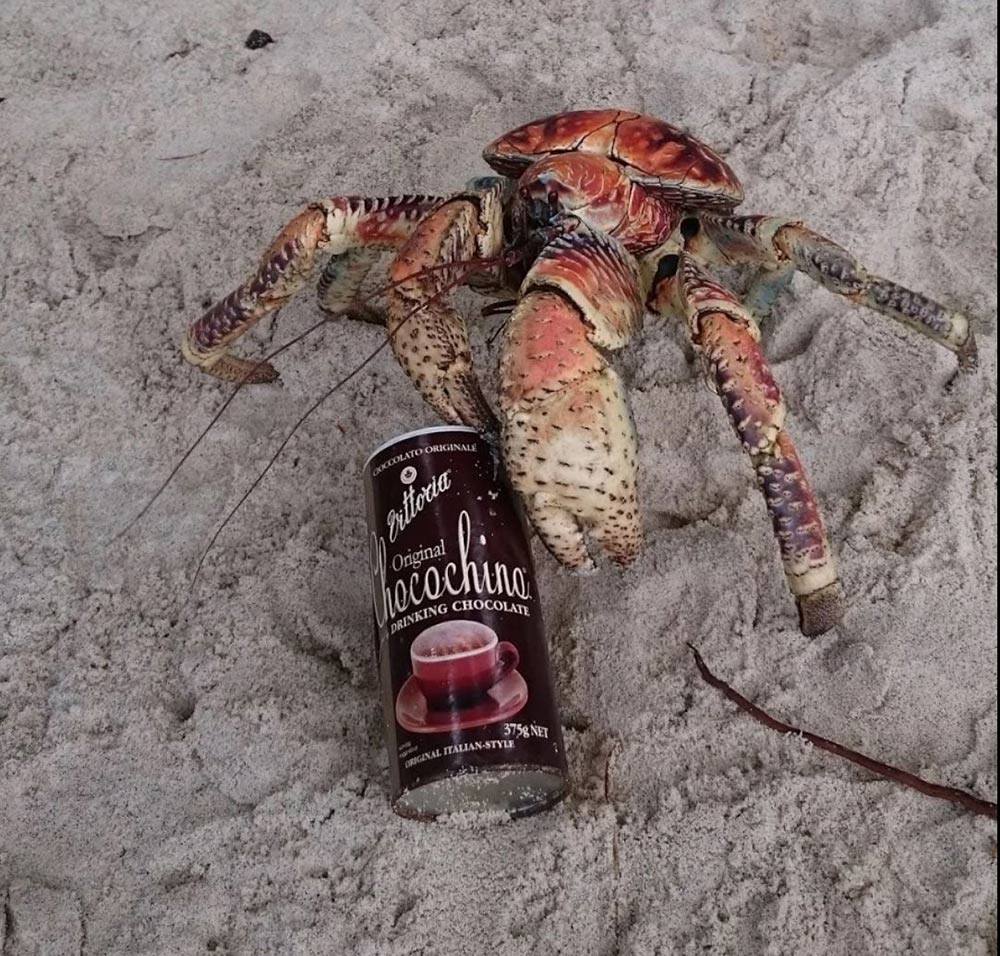 Anyone who has been out to Dolly beach, with their carefully prepared picnic, quickly finds themselves surrounded and held at ‘claw point’ until they surrender their bounty. And if you don’t acquiesce to their request, they will simply help themselves. Many a visitor or camper has had to retrieve their gear from the forest, where the crabs may have scampered away to assess their haul. Our last trip involved retrieving a plate, a hat, and a thong from the jungle after our tent had been raided during the night (that was after they had harassed my partner all night in the tent, and resulted in us standing in the ocean to eat our breakfast as a number of thugs were still in the vicinity come morning). 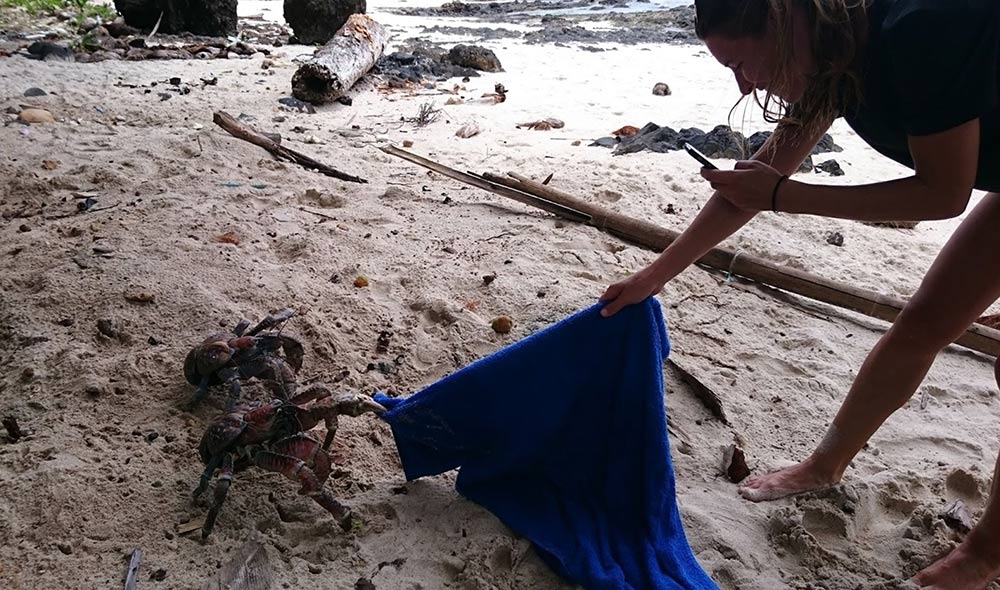 A legendary story exists about an army rifle going missing during a training session in the forest. Whether true or not, it highlights their indiscriminate thieving behaviour. One of my favourite stories is from our first Bird & Nature week event in 2006. Janos, our intrepid Abbott’s booby bird researcher and guide, had given his small group explicit instructions about etiquette around this rare and magnificent seabird. He subsequently laid out the gear he needed to tape a satellite tracker to the bird and then abseiled up to the canopy to retrieve his subject. Bird secured, he heads back to the forest floor, only to discover that one of his important pieces of equipment is missing, a large roll of silver tape. Bird now flapping and unhappy, he has to rifle through his pack to find another roll of tape, all whilst quietly berating the guests for not following his instructions about staying still so as not to distress the bird, and not touching anything. The guests all look at each other, slightly perplexed, as they know they hadn’t moved and no one had any reason to touch the equipment. They quietly watched the procedure of attaching the satellite tracker and Janos returns the bird to its nest high up in the canopy. As the guests are departing the nesting site, one spots a robber crab, hiding in a large log, proudly clutching its haul – a large roll of silver tape!

The island boasts two dozen species of different land crabs, many quite happily going about their business of scavenging, cleaning the forest floor and occasionally hunting each other for an easy feed. The robber crab, put simply, is the top of the food chain on Christmas Island. Like all of our land crabs, the robber crabs still use the ocean as part of their breeding cycle, the babies emerging quietly from the sea and using a shell for their first few months on land. Professor Brian Cox visited the island in 2012, to film a segment to include in his television series, Wonders of Life. When questioned why he was including robber crabs, he explained that robber crabs are one of the few species on the planet that experiences many of the planets physical forces throughout its life span – ‘How many animals born in the sea can also climb a tree?’. 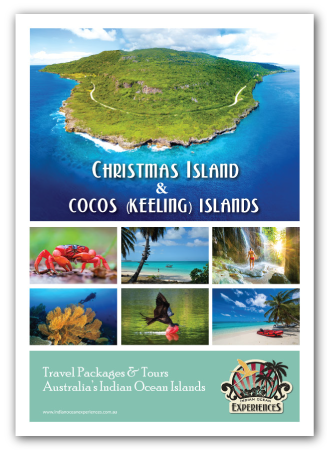