Join our 2019 Bird & Nature Week guest, Gwen Newman, as she provides some insights to her experience during this wonderful week of conservation & science….

I have recently returned from the Bird n’Nature Week on Christmas Island, organised by Indian Ocean Experiences whose advertisement I found in Birdlife Magazine. I was one of a group of 35 bird watchers from all over Australia. It was the adventure of a lifetime and delightfully different to any birding outings I have ever experienced before. Every day presented new amazing surprises and great opportunities for getting close-up and personal with nature. It was well planned and organised. Not everything was about birds but all was hugely interesting, educational, eye-opening, and fun.

Everything on Christmas Island is prioritised toward the protection and conservation of wildlife. I doubt there is another place anywhere that goes to such lengths to protect their native wildlife, including the birds. Sixty three percent of the island is National Park, with two Ramsar wetlands. We were so privileged to have four passionate and enthusiastic people for our teachers and guides for the week.

Where else would somebody like me have found themselves on the seaward side of a cliff where Red-tailed Tropic Birds were breeding? I am not very sure-footed and would not normally have had the courage to go there. My guide, Sue, realised I might have a problem and supported me over a narrow and, to me, precarious but short route. She inspired such confidence that I never for a moment had any fear. She took me to a spot where I could sit and, there I had my first sighting of a Tropic bird chick, tucked under a little ledge on the cliff-side, looking at me eye to eye. A little further away was a parent bird which had returned and was keeping its young chick safely behind it. I got a great photo of the chick peering out at us curiously from behind its parent.

Where else, in the middle of being shown a “soft release” area for such creatures as Blue tailed skinks, being bred back from the very edge of extinction, would I have had my attention suddenly diverted by a Parks and Wildlife person (Mark) capturing a Christmas Island Goshawk, plucked from its perch with a sticky ended stick? We all crowded about to admire and photograph the bird and watch it being banded and released. The bird was so un-phased that, upon release, it merely flew to a low nearby branch and sat and looked at us as if to say, “What was that all about?” Christmas Island was uninhabited for such a long time in its history that the wildlife does not seem to exhibit any fear of humans. That, plus the fact that wildlife is fully protected, lends itself to a very unique close-up and personal experience. 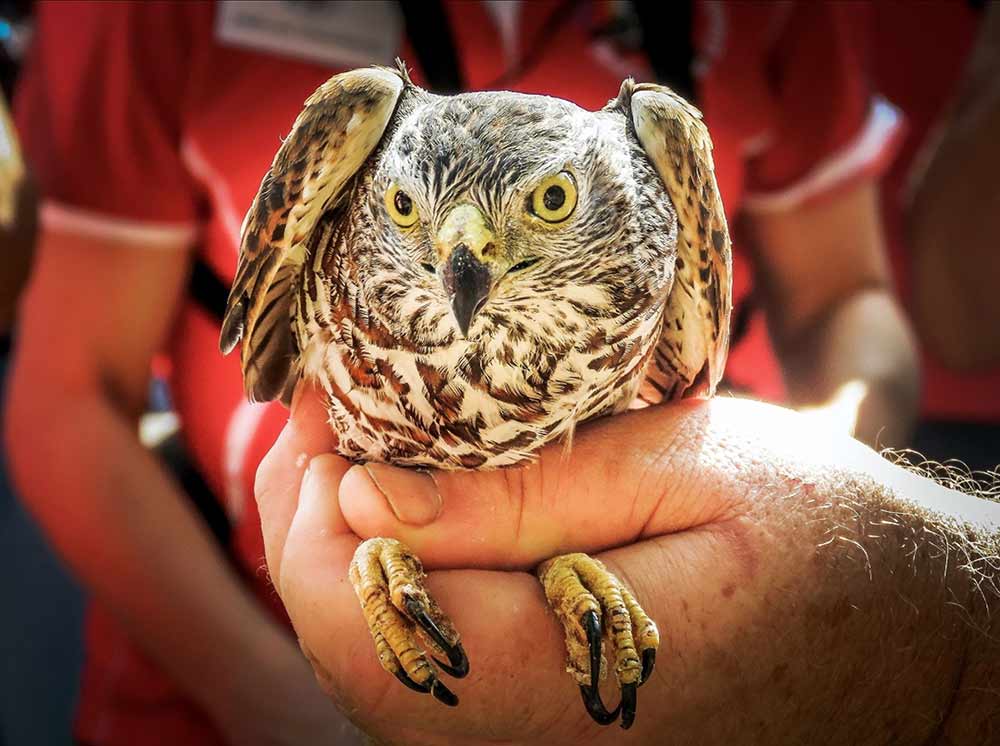 Where else would you come over a rise in the road and have to stop the vehicle because ahead were Frigate birds in all sorts of weird and wonderful poses and positions, sitting all over the road with wings spread awkwardly? Some of them looking very comical indeed and none of them were concerned by our presence or in any hurry to leave. It was the hottest part of the day, and they were on what must have been blistering hot bitumen. Our guide, David, said they were “ironing themselves” and explained that they are built to be dynamic fliers and that their wings wear after a while and they “iron themselves” back into the right aerodynamic shape to be more effective in flight. Weird, but what an amazing experience!

The endemic Abbotts Boobies were breeding. They tend to breed higher in the foliage in less accessible places but are easily seen. Other breeding birds are very accessible and, like most of the island’s birds, do not seem to be concerned about the presence of humans. Brown Boobies nest among the rocks; Red-footed Boobies are found literally “hanging out” of nests in a most relaxed way in colonies, often low in the trees, a photographer’s delight.

For birders, what distinguishes Christmas Island from other places within Australia’s territory is not so much the number of species but the quality of the experience. It is amazing how close you can get to the birds. If you are looking for “lifers” you will find them. They could include birds such as the Christmas Island Frigate bird, Abbott’s Booby, The Golden Bosun (a golden morph of the White-tailed Tropic bird found only on Christmas Island), the Christmas Island Imperial Pigeon, the Emerald Dove which is quite small and different to the one on the mainland, the Christmas Island Hawk Owl, Christmas Island Glossy Swiftlet and Christmas Island White eye. The ‘lifer’ list may also include Asian visitors at various times of the year. Our group heard the Asian Koel calling but were not able to sight it. One of our group reported seeing a Java Sparrow, which birds do visit the island. One bird known to have colonised the island in the early 1990’s is the White-breasted Waterhen.

I have only touched a little on what was a great adventure. The Bird ‘n Nature Week is about the wildlife and nature experience in general on Christmas Island, not just the birds. I would thoroughly recommend the entire experience. I recommend taking a small camera as well as a long lens. Much of the time you will be photographing from close-up. It was a wonderful and unforgettable experience and I recommend you go and experience it for yourselves.

You can book your Christmas Island Bird & Nature Week 2020 adventure by clicking the following… https://www.indianoceanexperiences.com.au/birdwatching